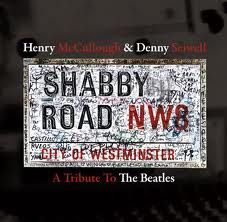 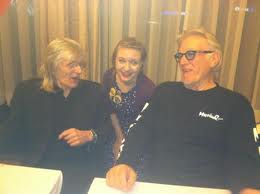 Henry McCullough had played the Beatles Festival in Chicago last year and again this year (2012) in New York. Together with the original Wings drummer Denny Seiwell they made the decision to produce a Beatles tribute album. I assisted and recorded and played on three of the tracks in Portrush. I brought in my good friend Michael Doherty with a great Beatles repertoir who played on "My Guitar Gently Weeps", "Norwegian Wood", and "Come Together".
The album also benefitted from the production skills of John Brown who contributed greatly on these tracks.
The album has been well received and I have included a review by Beto Hale below:

Henry McCullough & Denny Seiwell Shabby Road By Beto Hale   Very few select musicians in the world have had the luck, abilities and personality to play with a Beatle. Henry McCullough and Denny Seiwell were two of those players chosen by the gods (and Sir Paul). They were there at the beginning of Macca’s early post-Beatles phase, when Wings was in its infancy. In this new release, they pay tribute to the Fab Four with 11 tracks than span the band’s entire whirlwind career. I expected the versions to be good, respectful covers of the classics, but I was actually blown away by many of them, and I am as hard-core a Beatles fan as they come. “Here Comes the Sun” has a country twist that Willie Nelson would be proud of; “Can’t Buy Me Love” is a dirty blues shuffle; “While My Guitar Gently Weeps” is a beautiful acoustic rendition in which Mr. McCullough’s vocals are simply breathtaking; and “Come Together”, as much as it’s been done and redone over the years, is as fresh, aggressive and, well “black” as it was intended to be. Listening to this collection, which only gets better with each spin, it is obvious why Seiwell, with his precise, powerful yet deep and soulful drumming, and McCullough, with his amazing singing and extraordinary guitar work, were selected by Paul McCartney to play with him after having been a member of the single most successful musical act in history. The musicians that accompany the duo of veterans in this album are, of course, all outstanding as well.       --- Beto Hale President
Let's Mexam Music, Inc. Music Production/Composition Spanish-English/English-Spanish Translations
Los Angeles, CA

The album will be available at www.henrymccullough.com