The new album "Blind" is almost finished. I am still making the final selection for the 10 songs I want to include. This coupled with the logistics of the people involved is the main reason for the delay.
Henry McCullough was good enough to want to contribute some guitar work and Ian Murray is working on percussion.
Henry lives in Northern Ireland and the first plan was to rent a house in Portstewart and turn it into a recording studio for three days. Ian Murray and I jumped in the van and met up with Henry at his home.
Although I had sent Henry music on line there's nothing quite like a, stand up and play, jam to get in the groove. Henry plugged in his Gibson 335 and that was the first half of the day. 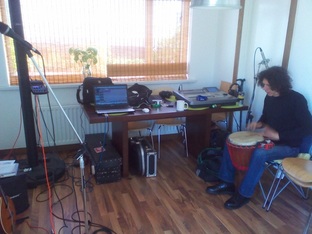 Ian Murray
Lunch was tea and cakes down on the sea front at one of the cafe's in Port Stewart. A few years ago, at one of Henry's earlier recording session lunch breaks, he met up with Pink Floyd , who were recording in Abbey Road studios, as was he in a another studio with Paul McCartney. The boys from Floyd asked for someone to come through. Henry appeared and there were six bits of paper face down. he picked one up, It said "when did you last have a fight with your wife".  After the track "Money" you hear him say "I don't know I was drunk at the time". Enhanced with a bit of echo...
At the end of the day Henry drove home and Ian and I went down to the town for a bite to eat. The house is in a very nice area and there was a lot of expensive equipment there but in among it all there's Henrys 335 and a Gibson SG he bought from an American hotel room porter in 1967 for $50.00. Denny Laine used it in Wings, it's never been in a case, and he's had it all this time.
I had to do something to put my mind at rest so I hid them in the wardrobe. 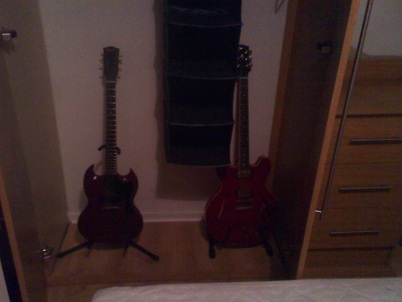 After the three day session we spent the last evening at Henrys place. His partner Josie cooks the best food.
Now that the dust has settled I have taken some tunes off the original list in favour of some new tunes. Henry wants to add some guitar and cross the T's and dot the I's. Ian needs the finished article to bottom out the percussion. Hopefully Henry and I can tie in this month.
Alan. Sept 2010

Thank you to all involved for your efforts.
I hope you enjoy it..... Alan.